Given the rise of AI, Natural Language Processing has become increasingly popular and almost all recent conferences have reported a record breaking number of submissions. Yet, never in the history of ACL have we seen such a dramatic growth: within just a single year, we have gone from 1544 submissions to 2906! This is illustrated in the following graph that shows the growth of ACL over the past 20 years in terms of the number of submissions, reviewers and (Senior) Area Chairs. 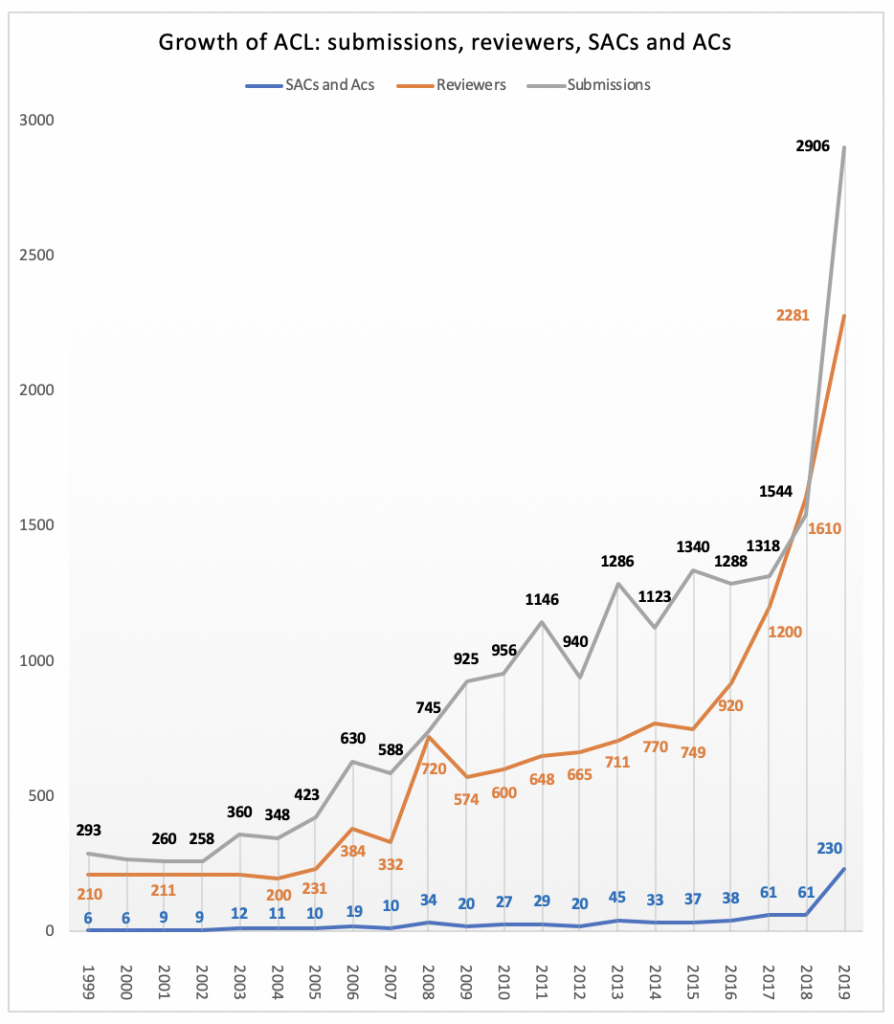 Review of such a large number of submissions requires a large, well-organised Program Committee. Extending the ACL 2018 practice, we created a structure similar to the conferences that have a Senior Program Committee alongside the Program Committee. For the Senior PC, we recruited a relatively large number of Senior Area Chairs (46, 2-4 to head each area) and Area Chairs (184, 3-15 per area). We also differentiated between their roles so that SACs assign papers to ACs and reviewers and make recommendations for their area, while ACs each manage a smaller set of papers within the area, lead discussions with reviewers, write meta-reviews and make initial recommendations. This structure also helps to compensate for the problem that our rapidly growing field is suffering from: the lack of experienced reviewers. As ACs focus on a smaller number of papers, they can pay more attention to the review process. As for reviewers, we simply have many of them this year: 2281 (ACL 2018 had 1610).

With such a huge number of submissions, every step of conference organisation (from the initial checking of submissions to decision making) takes longer than before. Knowing the timeline would be extremely tight, we looked into ways of improving efficiency. We wanted to improve efficiency in ways that would optimise the experience for authors and PC members. In particular, we reduced the number of deadlines requiring a short turn-around of 3 days (or less). Such deadlines at best are stressful for all, but often work poorly, given the diversity of work and life situations in the community (i.e. the great variation in times / days when people are actually available for conference-related work).

We implemented the following changes:

So, instead of author response, we decided to invest in promoting discussion within the PC,   and on ensuring that discussions, papers and reviews have the full attention of ACs.

However, even with our time saving measures the conference schedule is still too tight, not only for us PC chairs but also for (S)ACs and reviewers. Interestingly, although ACL has grown significantly over the past 20 years, the schedule remains almost the same as it was back in 1999. In particular, the time between the submission deadline and the notification of acceptance is exactly the same (2 months) as it was in 1999, although the number of submissions has increased tenfold and the size and the complexity of the PC even more. It may be time to adopt the practice of related conferences (e.g., IJCAI, NeurIPS, SIGIR) and extend the schedule to allow for 3-4 months for this process. This could be critical for maintaining the quality of reviewing as the conference grows further.

The conference schedule is also impacted by the schedules for other conferences (e.g. this year NAACL and EMNLP-IJCNLP) and the ACL Guidelines and desire for preprints. We made a concerted effort with other conferences to avoid overlap in the review period (which otherwise shortened the available time for each conference). Overlapping review periods will either result in unhappy authors (when they cannot submit to all conferences) or chaos for PC chairs who struggle to manage multiple submissions and large numbers of withdrawn papers. Also reviewers may be less likely to review for multiple conferences at the same time. Even with no overlap this year, there is still a desire from authors for a longer period in between conferences, so that they can revise and resubmit papers based on the feedback from previous conferences, and rejection from one conference does not leave enough time for people to submit before the anonymity period of the next conference begins. In general, not just the dates of the conferences but also the number and scheduling of deadlines should be given community-wide attention going forward.

Theme by Anders Noren — Up ↑

This website uses cookies to improve your experience while you navigate through the website. Out of these, the cookies that are categorized as necessary are stored on your browser as they are essential for the working of basic functionalities of the website. We also use third-party cookies that help us analyze and understand how you use this website. These cookies will be stored in your browser only with your consent. You also have the option to opt-out of these cookies. But opting out of some of these cookies may affect your browsing experience.
Necessary Always Enabled
Necessary cookies are absolutely essential for the website to function properly. This category only includes cookies that ensures basic functionalities and security features of the website. These cookies do not store any personal information.
Non-necessary
Any cookies that may not be particularly necessary for the website to function and is used specifically to collect user personal data via analytics, ads, other embedded contents are termed as non-necessary cookies. It is mandatory to procure user consent prior to running these cookies on your website.
SAVE & ACCEPT